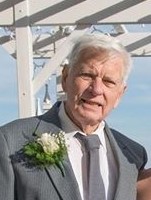 Benson, NC: Mr. Walter G. Dudek, Jr. age 90 of Benson, died Thursday, March 26, 2020 at his residence. No services will be held at this time. Mr. Dudek was born November 13, 1929 in Connecticut to the late Walter G. Dudek, Sr. and Agnes Klein Dudek. Mr. Dudek is preceded in death by his wife, Irene Frank Dudek, and his two sisters. He proudly served in the United States Army during the Korean War. Mr. Dudek was a mail carrier for the US Postal Service and was a member of the National Association of Letter Carriers. Surviving include Daughter, Melissa Riddell of Simsbury, Connecticut; Sons and Daughter-In-Law, Scott and Kathy Dudek of Brentwood, California, and Todd Dudek of Hebron, Maryland; nine grandchildren; 11 great-grandchildren; sister-in-law, Veronica Gere of Rocky Hill, Connecticut; and several nieces and nephews. Arrangements by Rose and Graham Funeral Home in Benson, NC.
To order memorial trees or send flowers to the family in memory of Walter Dudek, Jr., please visit our flower store.