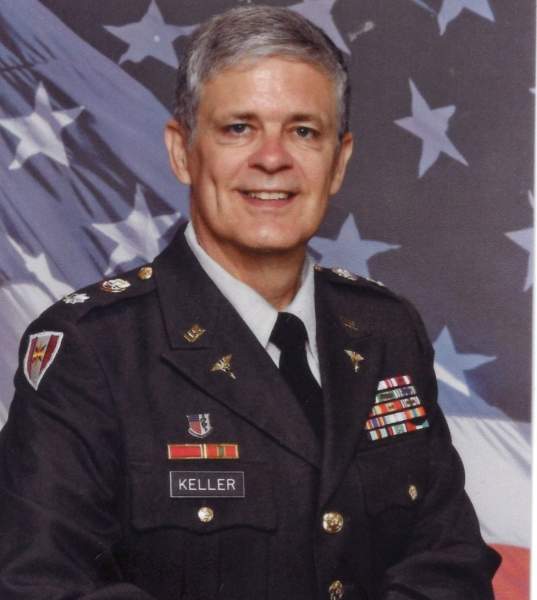 LTC (ret) Charles John Gerard Keller was born on June 18, 1955 in Jersey City, NJ to Charles and Dolores Keller.  He passed away in Olympia, WA on February 1, 2022 with a divine medal in his hand and a scapular around his neck.

This will be an attempt to convey a few of Charlie’s biographical mentions, but I ask you to please share your own favorite happy memories in the comment section on the website of the Rose and Graham Funeral Home in Benson, NC.

Charlie was my beloved husband and he loved unconditionally.  We were married on January 9, 1998 in Augusta, GA with his parents, Charles and Anna Mae, and my parents, Emil and Yvette, and our friends, Ava, Schley, Donna, and Bill in attendance.  Charlie was a devoted father and our marriage was blessed with two incredible children.  Charlie was a patriotic U. S. Army Nurse, a committed volunteer, and a fun-loving vacationer on land and sea throughout his all too short 66 years of life on Earth.  Charlie had a “Goofy” sense of humor and he told “Dad jokes” which we will not perpetuate here. Charlie had a strong faith in God, was a lifelong devout Roman Catholic, and his greatest desire was to teach his children the same.  He loved to read and study his Bible daily and he prayed often with the Lord’s Prayer (“Our Father”) being his personal favorite.  Matthew 6:9

Charlie first tried to enlist in the Army in 1973, when he was still 17, but was turned away due to his age.  He resolutely returned the next day with his Step-Mom, Anna Mae, who signed her permission for Charlie to enlist in the Army.  A couple of years later, as the Vietnam War was ending, Charlie found himself training to go rescue people in Saigon by learning to jump off the back of a perfectly good airplane on a runway near Fort Bragg, NC.  That war was over before he could make it over there, but he served with distinction in the war zones of Iraq and Saudi Arabia during Desert Shield and Desert Storm in the 47th Combat Support Hospital (The Best D. . . Hospital out there!).  That desert war zone is where he worked in the critical care areas and where we first met.  His Army Career as a 66H 8A included assignments in Fort Sill, OK, Madigan AMC, WA, Eisenhower AMC, GA, Wurzburg, Germany, Landstuhl, Germany, SHAPE, Belgium, Keesler AFB, MS, Hunter AAF, GA, Fort Bragg, NC, and Fort Hood, TX.  Charlie dedicated over 37 years to serving his country in the US Army and retired to Orlando, Florida in 2011.

Charlie earned his high school diploma in 1973 at St. Vincent’s Seminary in Cape Girardeau, MO with the possibility of priesthood, but he told me he got glasses a couple of years into that and discovered girls looked really cute!  With the help of Sister Jeanne McKenna, he enrolled and graduated with his BSN from Mary Mount College of Nursing in Salina, KS in 1979.  He continued his lifelong learning when he enrolled in and attended the State University of New York at Buffalo, NY in 1982, Oklahoma City University in Lawton, OK in 1986, and earned his Master’s in Nursing from the University of Washington in Seattle, WA in June 1996.  Charlie held the CCM specialty certification and CMSA.

Charlie had many hobbies and interests and he loved learning.  He enjoyed traveling and while living in Germany and Belgium, our family visited the glories of Europe with numerous “volks marches” throughout the countryside.  Charlie loved fishing and trips with his son, Charles (CJ) on the North Sea and in Mississippi were some highlights which filled my freezer.  Charlie enjoyed wood working and built a fish tank stand with CJ and helped his son, Michael, build training steps for his Eagle Scout project.  Charlie earnestly wanted to help people and animals and spent untold hours raising foster kittens and puppies in Texas.  He volunteered numerous hours in our churches and in the schools when our kids still attended public schools.  Charlie was happy cheering on Amber and Michael during their mixed martial arts classes and was so proud when they both earned their black belts.  During our kids’ middle and high school years, Charlie took great pleasure directing and learning alongside our kids in homeschooling with Classical Conversations.  Charlie even tried learning Latin and French alongside Amber and Michael.  He lovingly listened to their numerous performances for orchestra, band, and bagpipes.  Charlie’s latest passion to help others led to his volunteer puppy raising with the Southeastern Guide Dog school where he helped raise and teach four puppies over the past six years basic obedience in preparation for their careers helping people (two puppies are now successfully working in arson detection and guide dog work).  Charlie cherished his family ties and was always happy to hear from his extended family members and friends.  Above all else, Charlie loved and was so proud of each of his kids and their many accomplishments through their perseverance.  They each brought him such great joy and happiness!

Charlie loved his “retirement job” at the Orlando VA Medical Center over these last 8 years.  He was a Nurse Case Manager and helping Veterans was his passion.  Charlie had the honor of a Salute To A Fallen Warrior ceremony on February 19, 2022 by Lynn Brownfield of the Dakota Sioux Nation.  Charlie was also honored by a virtual Memorial which was planned and hosted by his amazing work family at the Orlando VA within the Community Care Division on February 22, 2022.  The Virtual Memorial was truly a work of the heart, attended virtually by many far and wide.  I can never thank his work family enough for the effort it took putting that together.  He loved you all so much!  Charlie’s viewing was held in Rose and Graham Funeral Home in Benson, NC on March 8, 2022.

Charlie will be buried with full military honors at Arlington National Cemetery in Washington D.C. on May 5, 2022 with Catholic Mass beginning at 08:45 in the Old Post Chapel on Joint Base Myer-Henderson.  There is currently a 100-person limit inside the chapel for the Funeral Mass.  All are welcome for the outdoor portion after the Mass which consists of following the horse drawn caisson from the chapel through the cemetery, the 21-gun salute, and the short graveside ceremony.  In lieu of flowers, would you please consider a donation to Southeastern Guide Dogs in Charlie’s name with the thought of naming a future puppy in his honor?  Or perhaps a memorial donation in Charlie’s name to a military service organization of your preference to assist current and future military personnel.   For Southeastern Guide Dogs, go to https://www.guidedogs.org  Once there, hit the purple “donate” button at the top right.  After that, midway down the page is a “Tribute Gift” section where you can type in “Charles John Gerard Keller” and at the bottom, please type in the comment section “With goal to name a puppy “Charlie K” after a puppy raiser.

Thank you all very much and remember this is a celebration of a Christian Life so remember John 3:16.  ߘŠ

To order memorial trees or send flowers to the family in memory of US Army LTC (Retired) Charles John Gerard Keller, please visit our flower store.