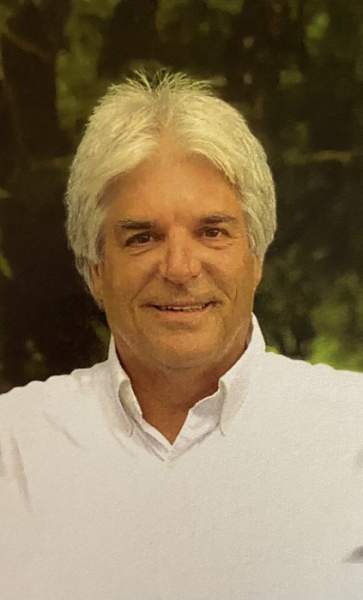 (Note: Trip wrote his own obituary and sent it to us in Oct. 2020 saying he didn’t want to burden his family with writing it. He simply asked we fill in the blank for the date he passed away. These are his words.) Smithfield, North Carolina – Trip Barry of South First Street passed away Monday, March 22nd following a lengthy battle with Pancreatic Cancer. Born Charles Franklyn Barry III in Louisville, Kentucky, September 11, 1954, to the Rev. Lynn and Jan Barry, he was a 1972 graduate of Smithfield-Selma Senior High School and a 1976 graduate of Campbell College. He was recognized as the ITC Student of The Year the spring of his senior year in high school. During the spring of 1974, after learning that the parachute rental and plane ride only cost $10, Trip made nine sport jumps from a private airfield in Pine Bluff, until his mother put a stop to those outings. Not being one to pass on adventure, he enjoyed such things as rock climbing, white water canoeing, and snow skiing. Following college, Trip moved to Long Beach, California, where he went into partnership with Jack Tankard to open Tankard-Barry Production Services, LLC, supplying lighting equipment, generators, and gaffer services for low budget film productions and TV commercials. A memorable moment was the afternoon he spent three hours “entertaining” Eddy Albert while his partner drove into Hollywood to pick up a generator after one of theirs went on the blink. The fall of 1979 he returned to North Carolina to work for family-owned radio stations WBZB in Selma and WBXB in Edenton serving as Vice President, General Manager, and Chief Engineer. Tapped to chair the Christmas parade that same year for the Smithfield Jaycees, he lined up eleven bands and over 225 other entries, making it one of the longest Christmas parades in Smithfield history. Tragedy struck in the fall of 1987, when a propane gas leak destroyed his home and put him in a Norfolk, Virginia, trauma unit for six weeks. It was eighteen months before he recovered enough that an experimental surgery at the UNC Burn Center in Chapel Hill gave him normal use of his hands once again. In 1990, he went to work for North Carolina Disability Determination Services in Raleigh. One of his most notable moments was when he received the N.C.D.D.S. Pride Award for Examiner of the Year in 1994. In the fall of 1995, after obtaining a Real Estate Brokers License, Trip went to work for Howard Perry and Walston, where he was recognized as a Gold Sales Associate, Silver Listings Sold Associate, and Volume Leader in their Clayton office in 1997. He opened a buyer’s agency, Creekside Realty, in Smithfield in 1998. He moved into the construction trade when he went to work for Mike Sherman Electric, Four Oaks, “wiring houses” in 1999. In 2002, he joined the Johnston County Building Inspections Department as a Code Enforcement Officer. By the spring of 2005 he had obtained level three certifications from the North Carolina Department of Insurance, Engineering and Codes Division, in building, fire, electrical, plumbing, and mechanical. Out of over 3000 certified inspectors in North Carolina at the time, he was the 122nd inspector to receive level three certifications in all five trades. From the summer of 2005 until the fall of 2016, he was the sole existing building fire inspector for Johnston County’s jurisdiction and seven of its towns. Following his position being moved to the EMS department, he continued working as a building inspector doing residential, commercial, property management, and virtual inspections. Trip is survived by his wife and best friend of thirty years, Nancy Lewis Barry, SSSHS 1970, of Smithfield, sisters Sarai Barry Daniels, SSSHS 1971, and Hank of Smithfield, Leslie Barry Richardson, SSSHS 1976, and JR of Hilton Head, South Carolina, Lanie Barry Ehlinger, SSSHS 1978, of Winston Salem, sister-in-law Cathy Lewis Leary, SHS 1968, and Dave of Greensboro, stepson Jonathan Allen and wife Marie, granddaughter Anna and step-grandsons Keegan and Mikael of Smithfield, stepdaughter Hannah Allen Wright of Smithfield, grandchildren Camille, Tucker and Harper Wright of Smithfield, and twelve nieces and nephews with growing families. A lifelong member of First Baptist Church, instead of teaching and preaching, Trip served food and encouraged others. From the fall of 1999 until the group disbanded in the spring of 2016, he enjoyed Christian fellowship while cooking with the Methodist Men on the first Sunday of the month at Centenary United Methodist Church. A private service for immediate family will be held at a later date. In lieu of flowers, contributions may be made to First Baptist Church, PO Box 209, Smithfield, NC 27577. Arrangements by Rose & Graham Funeral Home in Four Oaks.
To order memorial trees or send flowers to the family in memory of Trip Barry, please visit our flower store.