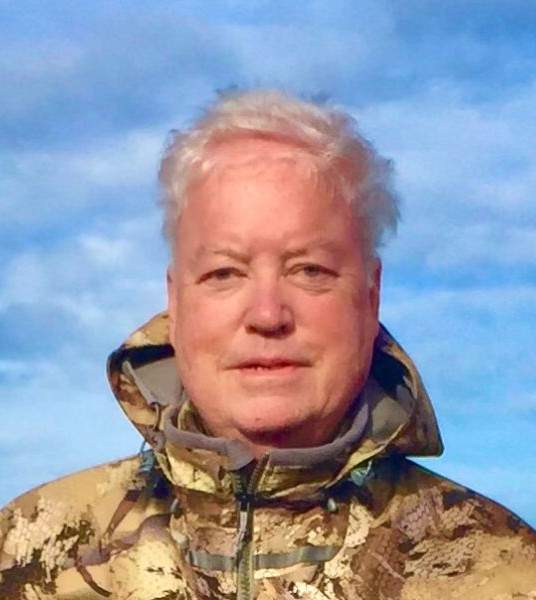 Robert Powell Holding III died at sunrise on November 11, 2021. He died looking out over the ocean from his home in Wrightsville Beach, surrounded by his family and filled with his love for God.

Hailing from a long line of respected elders, Robert Powell Holding III - or “Robbie” as many called him - charted his own self-directed path. He needed no outside credentials. He became many things at once: a broadcaster, a farmer, an entrepreneur, a sportsman, a master story teller, a devoted Christian, a political strategist, a most loving and beloved husband, father, brother, grandfather, uncle, and friend. He valued others over himself. In a world of hard changes, Robbie never left anyone behind. After a valiant struggle, he died of pancreatic cancer at the age of 69. He and his wife lived in Johnston County and in Wrightsville Beach.

Throughout their long marriage, he remained noticeably and proudly in love with his wife---Pamela Ennis Holding. They always made marriage look good. He and his son, Bob (Robert Powell Holding IV), were as inseparable as twins and enjoyed countless adventures hunting and fishing all over the world. Robbie enjoyed bragging about his daughter, Amy Stephenson Tsirbas. And though she lives in Sydney, Australia, they remained in daily touch. Robert and Pam Holding have six grandchildren: Felix Holding, Robert Powell Holding V, Grace Carolyn Holding, Chrysoula Ivy Tsirbas, Christian Harvey Tsirbas, Edward Jameson Tsirbas. He leaves also his daughter-in-law, Laura Holding, and his son-in-law, Dr. Angelo Tsirbas.

Robbie saw any ordinary day as a big adventure and a likely investment. He lived with an enhanced state of Possibility. Robbie proved a child prodigy at free enterprise, giving a new shine to that bright word,” entrepreneur.” He learned, for example, that the state was seeking ways to clear brush from Outer Banks channel markers. Already being a regular at Smithfield livestock auctions, Robbie thought of … goats. With the blessing of his proud father, he signed on to deliver a hundred to the Port Authority. Thinking ahead, Robbie sent off ninety-nine, one very visibly pregnant. And, after a bumpy ride to the coast, the promised one hundred arrived, hungry. Robbie was ten years old.

His siblings recall how, as a little boy, he would come in from the yard and tell a huge story about what’d just happened in plain view. The family soon called these “Robbie Tales” and heartily encouraged them. For Robbie, they’d started as true while daily growing truer. He never stopped telling them. Robbie was not only a tale teller; he was also the one everybody else told stories about. Everybody who knew him has stories to tell about Robbie.

His next well-known gambit involved buying a patent from a small-town doctor: The Inertia Nutcracker. “It cracks the shell without damaging the nut.” At state fairs, Robbie demonstrated and sold his nutcrackers. Ever seeking a bigger audience, he started demonstrating nutcrackers on local TV stations. He pioneered the use of television advertising to sell novelties. He was so sure of his product and the promise of the future that he approached Sears Roebuck, setting up a meeting at their Chicago headquarters. Executives were surprised then impressed by the promoter’s age: seventeen. Sears took on the nutcracker. By now, over one million have been sold.

To the last minute of his life, Robbie retained a boy’s energy and the confidence of a happy old man. He enrolled in both UNC-Chapel Hill and NC State but found he could not take semester-long breaks from his many civic and business game plans. Holding’s combination of raw belief, inspired intuition, and full-hearted showmanship helped him understand markets and design advertising. He could see what people really wanted, not just what they said they did. His biggest fiscal “Robbie Tale” would involve the purchase of an equipped if defunct Fayetteville TV station. A group of investors rallied behind his idea. Maybe the broadcast signal did not reach Chapel Hill, but Robbie knew his local demographic. During hours when other outlets featured world news, WKFT played The Jerry Springer Show. Ratings soared. In just three years, Robbie successfully sold WKFT at a fivefold return for investors.

Robbie’s religious faith was evident and audible in everything he did. He was a founding member of Friendship Baptist Church at McGee’s Crossroads in Johnston County, NC. He and Pam later joined Providence Presbyterian Church. They were longtime leaders in Wilmington Bible Study. Given his dramatic testimony and his gift for praying intimately aloud, Robbie had the language to reach even the skeptical. Full of spirits since 1952, Saved in 1984, he influenced many souls. According to the many stories told about him, Robert Holding was driven throughout his life by his unfailing sense of fun, his nose for opportunity in almost any situation, his taste for local history, and his great love for his family and his fellow man.

Throughout his successful business career, Robbie Holding remained active in conservative politics. Using his skills and experience in television advertising, he served as Media Strategist on the campaigns of Jesse Helms, Ronald Reagan, Lauch Faircloth, John East, Elizabeth Dole, and his brother, former US Congressman George Holding. He managed Leo Daughtry’s campaign for governor. Robbie served under Ronald Reagan on The Council for National Policy. Many encouraged Robbie to run for office himself, but he was too busy “checking my rabbit traps.”

Robert was a successful residential and commercial real estate developer and land broker in Johnston and New Hanover Counties. He was a developer of 319 Commercial Park in Johnston County and over 1,000 residential homesites. He founded RP Holding Realty and was affiliated also with Intracoastal Reality in Wilmington.

Robbie confronted stage-four cancer with an abiding faith in miracles. But friends and family soon found the truest miracle was Robbie himself. He had followed his own path. Faith in that and the love of his family saw him through. High and low, he had always been welcomed everywhere. Even at the end, he made us see how the worst tribulation can be turned toward something unique, humane. He made his own life---and those of his loved ones---nothing less wondrous than a “Robbie Tale.”

A Memorial Service will be held 11:00AM, Saturday, December 18th, 2021 at Providence Presbyterian Church, 14664 NC Highway 210, Angier, NC. Lunch will be served following the ceremony. Contributions may be made in Robert’s honor to the church’s building fund.
https://providencepresb.org/give.html

To order memorial trees or send flowers to the family in memory of Robert Powell Holding, III, please visit our flower store.