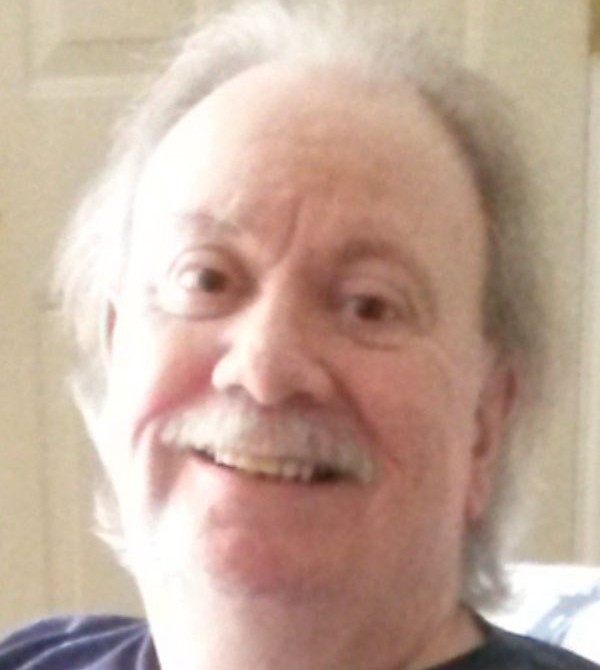 George Dominic Ludovico passed away in Raleigh, NC on April 16, 2021. He was born in New Haven, CT to the late Mary Elizabeth Ehehalt and John Ludovico and raised with his brother John in their loving home in North Haven, CT where George grew up loving baseball, animals, classic westerns and The Beatles. George lived and worked in North Haven until 2003 when he moved to Asheville, NC to be near his brother and to take the position of Retail Sales Manager at Karmasonics Music Video. At Karmasonics, George was able to further his love of music and to hone his “gift of gab” with customers who developed into friends. He was also able to meet many well-known music and tv celebs who were in Asheville on performance tours, and he even had the opportunity to play guitar for Leon Russell! It was after George moved to Asheville that he met his soul mate Kimberly Heritage, with whom he spent thirteen glorious years. Together, they shared a love of music and The Beatles and the exploration of the beauty of North Carolina. In 2018, George retired and he and Kim moved to Johnston County, NC. George was a proud American who dearly loved his country. He was proud of his Italian heritage and was a devotee of New Haven Apizza. He loved to cook and was known for his monster Italian meatballs. He was also a master turkey roaster, commandeering the kitchen on Thanksgiving and Christmas. George was an encyclopedia of New York Yankees trivia, a passionate hobbyist, collector and painter of monster movie models and model cars of the 1960’s and 1970’s, and owner of ‘George’s Collectible Corner’. He was also an accomplished mechanic and lover of Harley-Davidsons and classic Chevys. George was a kind, gentle and genuine man who loved to warmly engage anyone he met. He greeted folks with a smile and opened his heart to listen to their stories; and he didn’t forget them. He loved animals, particularly cats, and his rescue cat Whitey was remembered in George’s own funny and poignant stories. George’s passing has left us without the love and generosity of spirit that he daily contributed to this world. Those qualities will be remembered with gratitude, deep affection and love. George is survived by his loving partner Kimberly Heritage, stepson John Bradley Thornton (Kaitlin), grandson Tucker Thornton, brother John Ludovico (Susan), and many nephews, nieces and step-nephews and step-nieces.
“And in the end, the love you take, is equal to the love you make.” ~ The Beatles
Celebrations of George’s life will be held in NC and CT. Dates and times to be announced.

To order memorial trees or send flowers to the family in memory of George Dominic Ludovico, please visit our flower store.